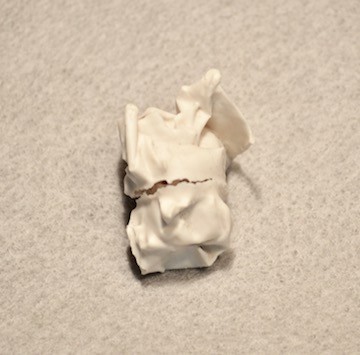 The fissure in K reveals a calcification process that likely took several months to form. Its process had two steps: the first was the manifestation of the object itself, and the second, the development of its fissure. Because of the incremental evolution of the whole into parts, it was once assumed to be a natural or inevitable outcome of the structure’s exposure to a hostile environment (undue wear, exposure to elements, etc.). However, with regard to the integrity of a human being—and what makes a human being a useful, integrous part of society—the cleaving of the whole into parts is neither natural nor inevitable. This specific specimen, K, is the fractured self of a disintegrated person, catalyzed by an internalized, toxic intersection of grandiosity and self-loathing. This specimen demonstrates a psychology with near equal parts integration and disintegration. It was found in 2006 by a volunteer cleaning up trash along the Hutchinson River Parkway near Greenwich, CT. Between 2006-2009, fourteen other specimens with fissures were found in the NY/NJ/CT tristate area alone, each at various points of the process--some with fissures just beginning, some completely cleaved in half.