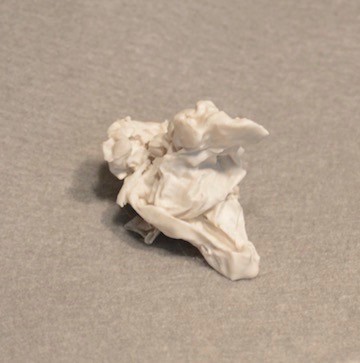 The contorted form of KK is the only example of raw contempt in this collection, though this type of form is considered common as similar objects can be found in any part of the globe where people live. Best viewed while level with its side, the “jaw” of the object--from its lower jutting “underbite” to its apex—creates a negative space, or maw. This maw is the unconscious, unmet need that contempt emerges around; the need it seeks to address through implicit and explicit violence perpetrated on others. The mangled rear of the form (not pictured) reveals an untenable structural muddle that underpins its whole. Unlike the inner fracturing of the self caused by the internalization of self-contempt (see K), this is a pure, outwardly projected contempt-type.