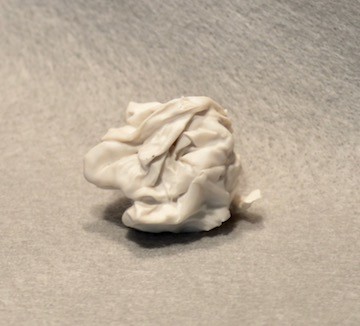 GG was originally a piece of paper trash. Its provenance is likely Vancouver, British Columbia, and was discovered on the site of Delta Landfill, which services the region. Computer imaging has detected molecular residue of ink on the hardened surface, which reveals the paper was used for an early draft (as evidenced by various corrections) of a poem. Additionally, the frustration and disappointment of the poet in relationship to her/his work is calcified into the wadded form. This particular object provides a useful case study for the public in both judgment and discernment. Poor judgment was exercised when the paper was thrown into the trash and not recycled, and poor discernment was at play when the poem was regarded as trash in the first place, as the poem itself—corrections notwithstanding—is both powerful and affecting; in a word, brilliant.

The facts of this object and its history invite several questions for our own reflection: How do we dispose of that which we regard as garbage? And also, why is it garbage? Is it?