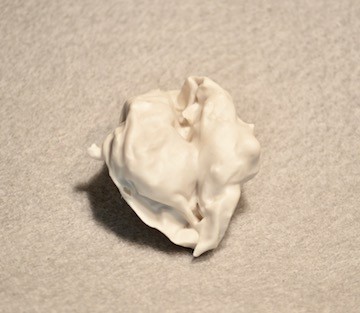 This collection of spontaneous or near-spontaneous calcifications is a modern phenomenon and is hypothesized to be a consequence of our industrialized/post-industrialized world. It is theorized that the combined internalization and projection (onto others, objects, environments, climate, etc.) of experience, coupled with the spread, speed, integration and even the embodiment of technology, has afforded a concrete residue to manifest into structured physicality. Typically, petrification or fossilization takes thousands of years: EE is the only example of that natural process in this collection. Known as “Eve’s vulva,” this specimen is attributed to one of the first female Homo Sapiens. Found in 1970, in the Oromia region of Ethiopia near the Kone Volcano, EE is the genitalia of a female of our species who perished in an eruption approximately 195,000 years ago, encased in hardened volcanic ash.