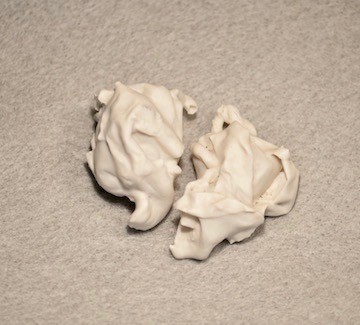 Discovered three years apart (2001, 2004 respectively) in the Sonora region of Mexico, Q and H are two sections of the same structure. While originally believed to be a spontaneous fossilization of two separate heart chambers of an ocelot kitten, newer technology reveals that these specimens do not originate from a living organism. Known collectively as “the broken heart,” these two structures were once one, and share a molecular patterning that captures a fundamental human paradox: the experience of connection and disconnection, of being a part of one thing but also separate. The complex surface of both sections shows how this paradox is still largely problematized in both personal and societal spheres. Humanity has yet to resolve the dichotomy. Perhaps when it does, a new form could emerge, with notable structural differences revealing a metaphysical integrity between humanity as a whole and its various and dynamic aspects. The possibility of that structure could finally resolve the question: What is required for humanity to finally and fully encounter itself?